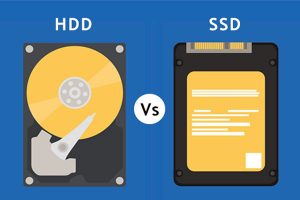 What’s the difference between SSDs and HDDs? Solid state drives and hard disk drives are similar in their physical specifications, but they store data very differently. There are advantages and disadvantages to each type of drive, and deciding on which type is right for you comes down to how you use your computer. Our guide shows you how each type of storage drive works and what it means for you.

An HDD is a data storage device that lives inside the computer. It has spinning disks inside where data is stored magnetically.

HDDs are considered a legacy technology, meaning they’ve been around longer than SSDs. In general, they are lower in cost and are practical for storing years of photos and videos or business files.

They are a proven technology, and are frequently less expensive than a solid state drives for the same amount of storage. Currently, HDDs are also available with more storage space than SSDs.

The drawbacks to HDDs are a result of the mechanical parts used to read and write data, as physically finding and retrieving data takes more time than electronically finding and retrieving data. The mechanical parts can skip or even fail if they are handled roughly or dropped. This is a concern in laptops, but not as much in desktops. HDDs are also heavier and use more energy than comparable SSDs.

SSDs got their name—solid state—because they have no moving parts. In an SSD, all data is stored in integrated circuits. This difference from HDDs has a lot of implications, especially in size and performance. Without the need for a spinning disk, SSDs are smaller in size. SSDs dramatically reduce access time since users don’t have to wait for platter rotation to start up.

SSDs are more expensive than HDDs per amount of storage but the gap is closing as SSD prices begin to drop.

Solid state drives deliver faster load times for games, applications, and movies. Because of the technology they use, SSDs are lighter and better able to withstand movement. In addition, SSD’s use less energy, allowing computers to run cooler.

SSDs are newer technology, and as such, are more expensive than HDDs. Although they are catching up, it can be harder to find large-capacity solid state drives. HDDs can be as much as 2.5 times larger.

Which is right for you?

HDDs are cheaper and you can get more storage space. SSDs, however, are faster, lighter, more durable, and use less energy. Your needs will dictate which storage drive will work best for you.

For instance, when it comes to Gaming, speed and capacity are paramount. Therefore they need a computer drive that accesses data quickly, which makes SSDs optimal for the best gaming experience.

When choosing between both, it is best to weigh up the pros and cons and determine what your usage will be.

All of our refurbished equipment is ex-corporate and as such is of a standard that is considerably higher than normal consumer level equipment. We source tier 1 brands such as HP, Dell, Lenovo to ensure that you receive only the highest level of IT equipment.

As a Microsoft Registered Refurbisher all of our refurbished computers or laptops are correctly installed and licensed.

Scroll back to top

Book your in-school no obligation demo, or simply find out more inforamtion about these amazing boards.